Nestled between the Nikon D610 and the D850 lies the Nikon D750 camera. First available in 2014, the D750 is now a few years old, but it is still a viable camera that continues to be popular. Why is that? Many photographers are still in love with this camera as it continues to produce some incredible still images and videos, and it knows how to turn ahead!

For any photographers looking for an absolutely excellent camera that can do just about anything, the Nikon D750 bundle has both speed and a high speed resolution that is second to none. Because of its price tag, it will definitely cater to a more select group of diehard photographers and professionals who probably work in an industry that relies on the camera, but it does this job well. It is a hair smaller than the D850, as well much more affordable. It boasts plenty of cool and exciting features, including a 24.3MP full-frame sensor and the same exact auto-focus as the D850. It also has 1080/60p video capture, built in Wi-Fi, and a top ISO of 51,200.

This camera is much more user friendly than its siblings, as well as its competitors. The Nikon D750 has a green Auto setting along with 13 popular shooting options such as Portrait, Sports, Night Portrait, etc. that make getting started on this camera a breeze. Along with these settings, it also has the ability to have different effect settings, such as High Key, Miniature Effect, Color Sketch, and many others. You have the changing dial to change burst modes, from a single shot to continuous high (which shoots at 6.5 frames per second) and it has a self-timer for the situations where you might need one.

The D750 looks very much like a traditional Nikon DSLR, which really is not a bad thing. The body is around 4.5 by 3 by 5.5 inches in measurement, and weighs 26.5 ounces. It is smaller and lighter than the similar D810, but at the same time, it uses the same durable carbon fiber and magnesium alloy construction that makes it very sturdy. The back of the camera is very user friendly like the rest of the camera, and has a tilting 3.2 inch display. While it does not swivel or turn completely over, it will let you shoot from the waist or overhead to get those creative shots. The hinge on the screen is very solid and many would even say it is overkill, but at least you know that it will not be breaking on you anytime soon! Overall this camera is very well built, and just gives off a very high quality feel to it when you pick it up in your hands.

The right side of the camera is the memory card compartment that holds two standard SD cards. To the left side of the camera, you have three compartments that has the accessory terminal, headphone and mic jacks, and lastly the USB and HDMI connections. The bottom of the camera has the standard tripod mount as well as the battery compartment. The battery is rated at 1,230 shots which will last a while no matter what you are shooting or taking a video of.

Overall Performance and Use

This camera has seen a lot of use over the years since its release, and has the portfolio to prove its worth. It is an excellent camera, and captures some of the sharpest images you will ever see. While some photographers have complained about the weight, there are really no big hang-ups or problems that they could come up with and complain about when it came to the D750. The images produced by this camera are full of vibrant color and great depth, everything a photographer could ask for.

In addition to great results, the camera is very responsive and will hardly ever give you any focusing issues thanks to its 51-point system. Its Expeed 4 processor will always ensure that things move along quickly, even when taking long bursts of photos. Photographers of any level will love this amount of speed and power that this awesome camera can provide to them. Just like any high quality DSLR camera, the D750 bundle comes ready with a wide range of ISO settings, with a general range of 100 all the way up to 6,400 for a wide variety of applications and settings.

In addition to stunning photos, the D750 captures some excellent 1080/60p videos. Even the auto focus works great, which other cameras can struggle with when it comes to video. When you are done shooting your videos or photos, you can then upload them with the camera’s built in Wi-Fi. The D750 was the first full-frame DSLR with built in Wi-Fi, an absolute game changer and now industry standard among quality DSLR cameras. Nikon is a company that is always innovating and pushing the envelope in order to give photographers the edge in this industry, and the D750 is a perfect example of this.

Overall, the Nikon D750 bundle was (and still is honestly) one of the greatest DSLR’s ever produced and sold. There is a reason that this camera won so many awards and received praise from thousands of different photographers from all around the world. Not only that, it set a new bar for DSLR cameras in its quality and its innovation, many of which are still seen in brand new cameras on the market right now. For professional photographers or aspiring filmmakers, this camera comes in at a price point that is too good to ignore. We highly recommend taking a hard look at the Nikon D750, as it may just be the perfect camera that you have been searching for! 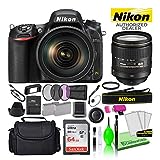