The Nikon D5600, which was originally released in the spring of 2017, is another successful release of Nikon’s D5000 series of APS-C cameras. The D5600 was designed to appeal to the beginner photographer that is looking to purchase their first entry-level DSLR or even existing owners that are looking to upgrade from the D5500.

This camera keeps most of the wide array of features and specifications of the previous D5500 while adding in a few new ones. These improvements include smartphone connectivity, an updated time-lapse enhancement, and a much better touch screen navigation. Even though the D5600 is very simple and straightforward, it is much more than your basic DSLR.

But while the D5600 has received plenty of praise and recognition, how does it stack up? Is the Nikon D5600 bundle deals worth the money? Let’s talk about that!

One thing that the Nikon D5600 does well is its image quality. This, plus the overall noise performance, is great. Images can be found to be usable up to ISO 3200. This camera is also capable of shooting video at 1080p at 60 FPS, which is more than enough for anyone wanting to get some high-quality video as well as photos.

The D5600 has 39 autofocusing points, which 9 are cross-type, giving it a great overall AF performance. The continuous autofocusing performance is also excellent and works extremely well with the face detect feature. Because of the great video quality, autofocus, and face detect, the D5600 makes for a fantastic vlogging camera for aspiring vloggers.

The battery life of the D5600 is good and rated for 820 shots per charge. It features a 3.2” touchscreen that articulates, allowing a user to have much better variability when using the camera. It also has a live view feature that disables the internal mirror and lets a user see exactly what the sensor captures. This is great to be able to get a more accurate visual of what a final photo will look like prior to shooting.

In addition to all of these features, the D5600 has a great optical viewfinder that is brighter and very sharp, giving over 95% coverage of the frame. The D5600 also uses the LCD touchscreen to allow a user to perform several functions directly through touch. This great feature really makes navigating the camera a breeze.

Overall ergonomics on this camera are good, and it is comfortable to hold and use even after several hours. It even fits well for those with larger hands. It has solid grips and overall a very good looking camera.

The D5600 has a time-lapse function, that allows users to capture time lapses only using the camera. It also has a built-in exposure smoothing feature that will even out any variations in lighting and prevents any exposure changes. This gives you a seamless and perfect, fully rendered time-lapse video, without the need for any post-processing.

The camera has a continuous shooting burst rate of 5 frames per second when shooting in JPEG, as well as a built-in WIFI, NFC, and Bluetooth capabilities that give the D5600 the ability to connect to a smartphone through Nikon’s Snapbridge app. Once it is connected, the Bluetooth gives the camera the ability to instantly connect to a paired device and automatically transfer images from the camera to the phone. This camera also has a microphone input port, great for people who want to use an external microphone for even better audio capture. The small built-in stereo microphone is directly in front of the hot shoe for those that don’t want an external microphone.

The D5600 has the ability to connect to a remote by using the remote input port, which users can then use to remotely trigger the camera during long exposures. These are just a small portion of all of the great features that the Nikon D5600 offers.

The D5600 does not have a built-in focusing motor, so any previously released Nikon D lenses will be manual focus only. This also means that the included diopter does not provide a large range to adjust the focus. This is not a huge issue except for those that might wear glasses or require more correction.

This camera only records video in live view mode, which makes the viewfinder irrelevant while in use. This could be a little difficult when shooting in direct sunlight that could make the LCD hard to see. Speaking of video, the D5600 also does not shoot in 4K video. This is not a huge deal for most people who will be using the video, but for those wanting 4K, you will need to spend a little more money on another camera.

Another downside to this camera is that there is no dust or weather sealing. This is not uncommon with many DSLRs, but for photographers that spend a lot of time outdoors, this is something to be aware of. There is also no headphone input, as well as that this camera is only charged through a dedicated battery charger. No USB port charging can be used with this camera.

Even in today’s standards, the Nikon D5600 bundle is an excellent camera. While it is definitely aimed towards photography, it is also a great option for those wanting to get started into video as well. For beginners wanting to upgrade from a basic point and shoot camera to their first DSLR, the D5600 is just about as good as it gets.

This camera is very easy to operate, has plenty of functions and features, and is not very difficult to learn to use. It provides great results, comes in at a great price point, and even in 2020, is one of the best options out on the market. 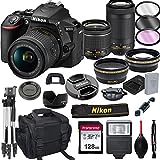 An In-Depth Nikon D850 Review for All Nikon Camera Enthusiasts

Want to join the discussion?
Feel free to contribute!